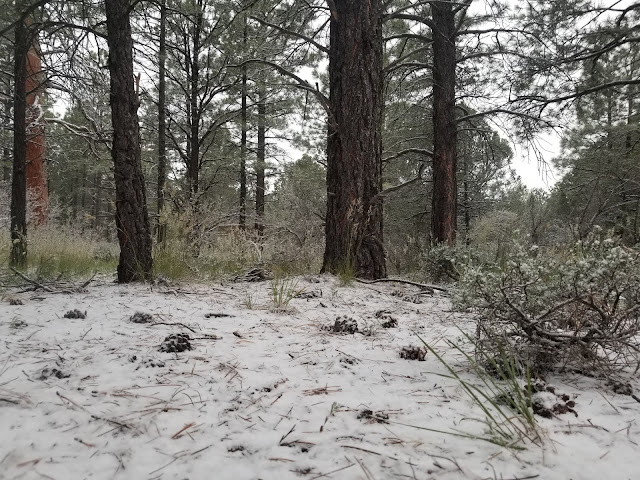 20.3 miles Just like the past few mornings, it was difficult to get up again. Unlike the past few mornings, I could actually see snow on top of my tent. It was supposed to rain or snow on and off the majority of the day again. That was not a motivating thought to get me out of my sleeping bag. I had also finally used the hand warmers that I had purchased back in Flagstaff, and they were still warm inside my bag. Somehow, I emerged from that bag and packed everything up one last time. I was only about 20 miles from the Utah border and on schedule to finish the trail today. Most of the items I had on me were damp or wet. It didn’t bother me packing them up as I knew I would be warm and dry tonight. What did bother me was having to put on my wet, cold, dirty shoes. After I did that, I had wet, cold, dirty socks as well. In Flagstaff I had also picked up toe warmers, so I stuck those inside my shoes and hoped that they would help. The view looking out of my tent. My camps
6 comments
Read more 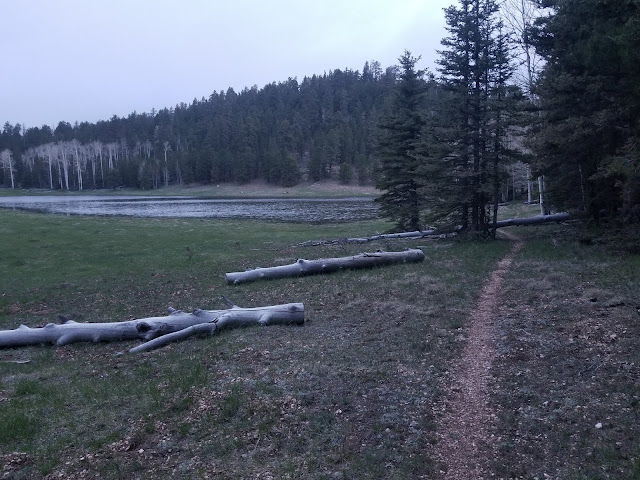 28.4 miles I was another cold, cold morning. The kind that make you have to really convince yourself to get out of your sleeping. And, that is what it did. I talked out loud to myself until I convinced myself to pack everything up. As I was undoing my poles from my tent, one end came loose and whacked me underneath the tip of my nose. It was such a force that I checked for blood. Thankfully, it didn't bleed and wasn't broken. It hurt enough, however, to sit down and take a moment to recover. It was not the start to the day I was looking for. As I headed down the trail, I passed a tank with a deer at the edge, then followed the trail which ran parallel to highway 67. I could see cars going by on their way to and from the Grand Canyon North Rim. Passing a tank in the early morning. Next, the trail climbed up Telephone Hill. Here I encountered an expansive burn area, and I could see storms coming in the distance. Today was supposed to be the first day of a multi day
Post a Comment
Read more 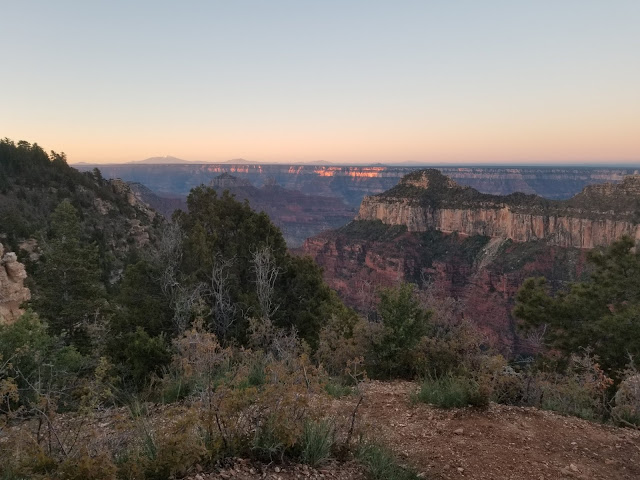 27.7 miles I meant to get up at first light this morning. I even set an alarm, but my sleeping bag was much warmer than the outside temperature and seemed like the better option. I wasn’t able to stay in my bag for too long though, as I was going to cross the section of trail with lingering snow today. The last report was that there was about 18 miles of snow to cross, but it was easily navigable. Talking to some other hikers last night, it seemed that much of that may have melted, and that the remaining snow was patchy and not solid. When I finally left the comfort of my sleeping bag and packed up my tent, I was in for a bit of a surprise. I had set my tent up in a hurry last night as the light was fading and hadn’t gotten a good look at the hiker/biker campsite. It was right on the rim! I had awesome views right from my tentsite that I didn’t even know where there. I definitely wish I had set up earlier last night, or at least seen the sunset. How did I miss this last night?
Post a Comment
Read more 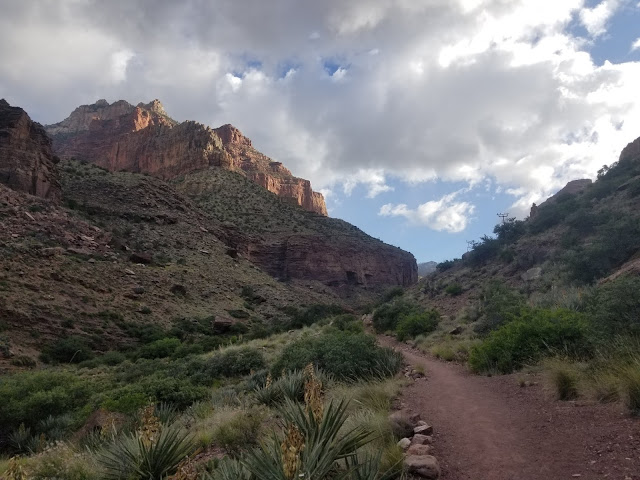 7.1 miles I had a lazy morning for once. I still woke up at first light, but, with the exception of visiting the pit toilets and grabbing my food bag out of the critter-proof box, I stayed in my sleeping bag for at least an hour. I had left my tent fly off last, with it right at the front of the tent in case it rained. There were only a few clouds during the night, but the rain came down this morning while I was in my sleeping bag, playing on my phone. I had to jump out of my tent and got it covered before everything got wet. I saw Smiley scrambling to cover himself with his tarp that he had already taken down. I hung out until the majority of the clouds had passed, and there was some sun shining through. As I started packing up my tent, I saw the parade of early morning trail runners going by. They had already reached the bottom of the canyon. I left Smiley, Honeydew, and Capitan, and started the long ascent back out of the canyon. It was all I had to do today, as I h
Post a Comment
Read more
More posts

Susanne
Hello! Most people visiting this blog will be my friends and family, but I realize some of you may be on here to check trail conditions or are simply curious. The most interesting thing about me is that my name is the German language version of Susanne, even though I was born and raised in suburban Chicago to US-born parents. This is how you pronounce my name, thanks to www.nordicnames.de.

Until recently I have mostly been water-oriented. I was a competitive swimmer for 15 years. I also hold a B.Sc. in Marine Science/Biology from the University of Tampa and a M.Sc. in Biology from California State University, Long Beach. My Masters thesis was conducted on round stingray population genetics.

A few years ago I joined the meetup group Sporty and Adventurous Ladies of Orange County (SALO) and began to venture out of the ocean and into the deserts and mountains of southern California. I began with short day hikes, then long day hikes, then moved on to multi-day backpacking trips. Now I am about to try thru-hiking the PCT. Wish me luck!